tl;dr: We've released version 1.1 of the Kickflip SDKs, which now include free regioned uploading and a global CDN for everybody! 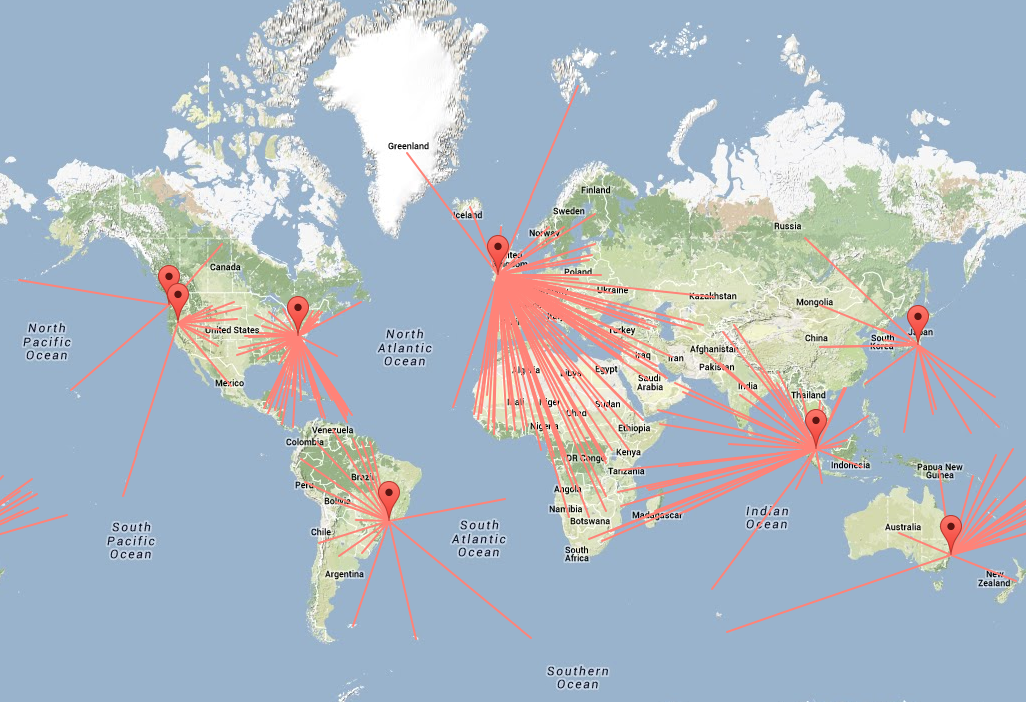 The new Kickflip SDKs are geo-aware, and automatically route your streams to the nearest CDN entry points.

Wow, it's been a crazy week for us!

We officially launched the 1.0 version of our SDKs to the public last week, and the response has been overwhelming. Hundreds of people from all over the world, from San Francisco to Mumbai, from London to Shanghai, and everywhere in between, have been using Kickflip to add high definition live video broadcasting to their applications. Flippin' awesome..

In fact, response has been so overwhelming that we've had to move our roadmap up faster than we originally anticipated in order to handle the surge of interest (I think that's what you call a "good problem").

So, today we are releasing the 1.1 version of our SDK. In addition to bug fixes for various Android and iOS devices (many of which were supplied by you, our gorgeous and glowing community), we've also introduced some amazing new features:

Free Multi-Region Uploading for All!

Previously, your Kickflip applications would be confined to a single region of the world, so all of your streamer's broadcasts would have to go to a specific server location, regardless of where they were in the world - for example, streamers in Mumbai would be uploading to New York - not very efficient.

As of today, however, all Kickflip broadcasts are multi-region, geo-located streams by default. We have endpoints all throughout the United States, multiple endpoints in Asia, one in Australia, one in Brazil, and one in Europe, so when your broadcasters start streaming, our API will automatically figure out their location and route them to the nearest endpoint location, ensuring that their streams get to the internet faster. Sweet!

The next amazing feature we're proud to announced is that as of today, ALL Kickflip applications will use our blazing fast, world-wide Content Distribution Network by default. Previously, only Premium and Enterprise accounts could use the CDN.

This is a global, enterprise-quality CDN, (the same one used by Netflix, in fact), and now you'll get to use it in all of your Kickflip applications for free! (Standard usage rates still apply.)

So what does this mean for you and your users? Streams will be faster, higher quality, and more stable - no matter where in the world your viewers are! Viewers in Australia will get the same quality broadcast of a streamer in San Francisco as streamers close to the origin.

Combined, these two amazing new features mean that Kickflip broadcasts will be faster, higher quality and more robust than any other streaming video platform on earth - no matter where in the world your broadcasters and viewers are!

So go ahead and try it out! I think you'll notice the improvement immediately. If you've got any questions or comments, please let us know!

Kickflip is the easiest way to add live video broadcasting to any mobile app!